In the silence, I listen for your still voice,

But all I hear is nothing,

In the darkness, I strain to see your lighted figure,

But all I get is more darkness. END_OF_DOCUMENT_TOKEN_TO_BE_REPLACED

Walking through the empty walls

People she used to know

‘One day at a time’, Laila said to herself as she turned off the alarm she had snoozed three times already. She felt the weight of the world on her shoulders as she sat up on the disheveled bed. She couldn’t remember sleeping. There had been a lot of crying and drinking to drown her fears and she fell asleep somewhere in the middle. The pain still gnawed at her heart while she silently whispered ‘Help me God’  END_OF_DOCUMENT_TOKEN_TO_BE_REPLACED

I was delicately beautiful

Some would even say, dainty

Then came the cracks

The endless stretch of thin lines

That showed I was falling apart

END_OF_DOCUMENT_TOKEN_TO_BE_REPLACED 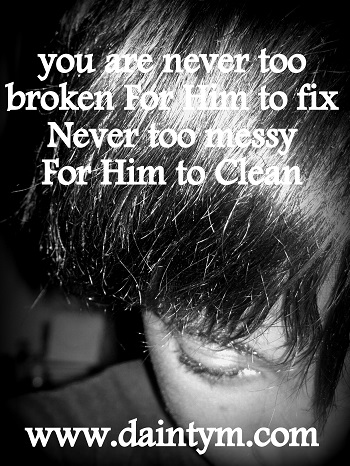 He loves you too much to let you go!

Okay, I’ve heard it over and over again of how much God loves us. But there are times when I’m like; ‘God, I’m way too messy for you. Just be you, up there and let me be me, down here- a mere human’. There are also times when I put my hands in the air after stumbling a couple times and I’m like, ‘you know what, I’m done trying!’

But then you see one little quote or a Bible verse while scrolling down your Instagram timeline, a little sentence that says; ‘God loves you’. Of course you shake your head in disbelief and continue the day’s work.

Just before you shut your eyelids for the night, you think about it again; ‘if He hates me, He could kill me at any time; maybe this night. Oh wait! I can’t sleep with the lights turned off’. Then insomnia sets in, along with anxiety and depression. Soon enough you move farther away from God and find solace in your ‘drug’, whatever it may be.

It sets you on a temporary high, takes your fears away for a moment, and gives you an illusion of love. But it doesn’t last so long. It drops you so low; you could swear you fell off a cliff! So, we take it more often till we can’t do without it; call it an addiction. Then the struggles to get lose from its claws begin. The shame; the guilt; who do you tell? Who would understand?

In the midst of this, through the mist I see, His hand reaching out. His love is still present. ‘No, how can this be? I’m way too far gone; you really don’t want to have anything to do with me, God’. But how long will we keep running? What’s there to lose? Really, I’ve got nothing more to lose!

Still afraid, I lift my hands in surrender, too weak to run. I raise the white flag. And there He is, with arms open wide. I quickly turn around, unsure it’s for me. But it is. He pulls me into a deep embrace and I’m crying hysterically. I just don’t get it! What kind of love is this? I mess up. I fall. I struggle. I falter. Yet, He still loves me! I’ll never be able to fully grasp the depth of His love. It’s just crazy! But it’s crazy amazing!

Soon enough, you begin to love Him back. Longing to be with Him- to make Him smile. He’s already given us everything! How can we repay Him? Just love Him some more! Obey Him. Love the creatures He has made; even though they may be irksome sometimes. But it gets a little easier. Because He helps you do it by living inside you, making His thoughts your thoughts, His words your words! Such a beautiful possession!

How long do you think you’re gonna keep running? Forever? Believe me, it’s exhausting! There’s a whole lot more to gain, than there is to lose. I think that’s a beautiful exchange! My imperfection for His perfection; my sins for His righteousness; my mess for His mercy; my shame for His glory; my hurts for His healing; my bondage for His freedom. Oh my! This is by far the best deal ever! Call it the Sicilian offer, one that can’t be refused.

Are you ready to take the offer?

There it was again, the monster she dreaded,

Ripping off everything that got in its way,

Horns punctuated his face; his claws were of a bear,

Heart pounding, throat thickening, fists clenched, she tried to get up again,

Groping in the dark, trying to find her way,

Should she scream for help?

Who would answer her?

She was alone, just as she wanted,

The web she was in was all so scary,

There was no way out of it,

If there was a God, he sure wouldn’t want to save her-she was too far gone to be saved,

The hurt filled her heart till it began to overflow

Another shrill disturbed the silence of the night,

The monster had wrenched the heart of another victim,

For how long would she keep running in circles?

But who was she to end the life she never owned?

She shivered as the cold wind brushed her fragile skin,

With the shackles on her wrists and ankles,

She sat waiting for her turn like a cow led to slaughter,

If only He could save her-

If only He still loved her like He always said,

Wiping the tears off her dirt covered face,

She looked up to see the monster in front of her,

A knot tightened in her throat, too hard to swallow

There he was with the stench of death oozing out of him,

He stretched out his claws towards her heart,

The end had come for her,

He was going to rip off every bit of her,

Even though his blood thirst remained insatiable,

She knew she deserved this,

Shutting her eyes, she cried from the depths of her heart

The silence that screamed louder than the storm,

She slowly opened her eyes,

The monster was gone,

Shackles fell off her wrists and ankles,

She was free, or was she dreaming?

Would the monster come again, stronger and more at rage than it was?

Lots of us struggle with one monster or the other(addictions, obsessions, things we would love to change, things we can’t tell anyone), we keep running around in the thick web of sins. But God is our ever present help in times of need, always ready to save you. Just call on Him. Its time to stop running.